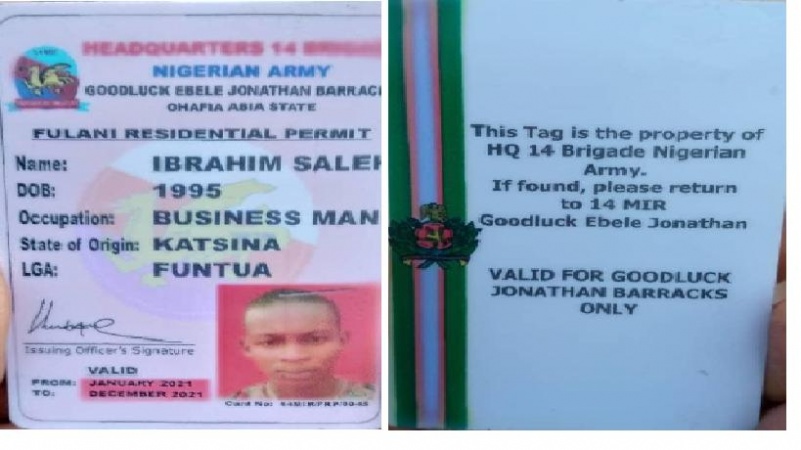 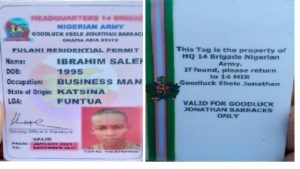 One of the ID Cards being circulated online has Headquarters 14 Brigade Nigerian Army, Goodluck Ebele Jonathan Barracks, Ohafia Abia State, as the issuing authority. Termed FULANI RESIDENTIAL PERMIT, it was issued to one Ibrahim Saleh, purportedly a businessman from Funtua Local Government Area of Katsina State. The card, which has the issuing officer’s signature, is “VALID From January 2021 to December 2021”.

The back of the card reads: “This Tag is the property of HQ 14 14 Brigade Nigerian Army. If found, please return to 14 MIR Goodluck Ebele Jonathan Barracks.

The discovery of the strange ID Cards comes at a time of heightened apprehension in the South-East following the revelations of the Prelate of the Methodist Church Nigeria, His Eminence, Samuel Kanu Uche, who paid N100 million ransom after being kidnapped late last month along Leru-Ihube road, off the Enugu-Port Harcourt Expressway in the Umunneochi Local Government Area of Abia State.

Bishop Uche, who was abducted together with his chaplain, Very Rev. Abidemi Shittu, and the Bishop of Owerri, Rt. Rev. Dennis Mark, said upon his release that “the eight-man gang was made up of ‘Fulani boys’ who claimed to be against the government.” He revealed that only one of the hoodlums understood English, while others spoke Fulfulde. The cleric said he observed that military men were around the place where the hoodlums operated, while their cows were also around the vicinity.

The Nigerian Army, however, quickly distanced itself from the incident.

Concerned Southeasteners who spoke with News Express said that the discovery of the secret FULANI RESIDENTIAL PERMIT has confirmed claims that purported Fulani herdsmen wreaking havoc in the South-East enjoy the support of the Nigerian Army. One of them, a foremost rights activist, said: “This has vindicated us. The Nigerian Army issues ID cards to Fulani civilians committing kidnapping and other atrocities in the South-East. They issue these cards to them as a cover to enable them enjoy protection while perpetrating these crimes. There are even cases where these kidnappers run into army barracks when being pursued by local vigilantes.”

When News Express showed the FULANI RESIDENTIAL PERMIT to Military Spokesman, Major General Bernard Onyeuko, on Thursday morning, June 2, he expressed surprise and promised to discuss with Director Army Public Relations, Brigadier General Onyema Nwachukwu, and get back. He was yet to do so as at the time of filing this report. Efforts by News Express to get Brig.-Gen. Nwachukwu’s reaction, which included a visit to his office on Thursday, did not yield fruits.