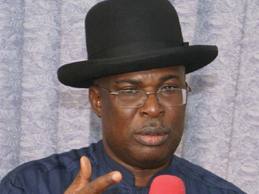 Pastor Reuben Wilson, founder of an All Progressives Congress  (APC) support group in Bayelsa Pastor Reuben Initiative for Good Leadership and Accountability (PRIFGLA), on Thursday applauded the humane dispisition of the leader of the APC in the state, Chief Timipre Sylva, as he clocks today.

PRIFGLA in a statement by its founder, Wilson, described Sylva as an invaluable leader who has contributed meaningfully to the development of Nigeria, Africa and the world at large.

PRIFGLA noted that Sylva, right from when he was governor of Bayelsa left no one in doubt that he was committed to good governance and raising the standard of living of his people.

Wildon said the people of Bayelsa and the entire Niger Delta will remain grateful to Sylva for facilitating the completion of the Nigerian Content tower in Yenagoa, and even more importantly, the approval of the Federal Executive Council to build the world class Conference Hostel Facility in Yenagoa beside the NCDMB headquarters which the government has matched words with action by approving the sum of N 22 billion for its execution.

The APC chieftain noted that Sylva’s 58 years on earth had been expended on changing the narratives for a better future for the people of Bayelsa, which he has always demonstrated each time he is entrusted with the task of managing the affairs of the people.

He also prayed to God to continue to catapult the minister to greater heights.

“We are full of thanks to God Almighty for preserving your life and using you to make so much impact both locally, nationally and internationally, especially in the oil and gas sector where you have written your name in gold letters.

“We pray for sound health, wisdom and more grace upon Sylva”s life – to continue to touch lives positively. Happy birthday, your Excellency!”