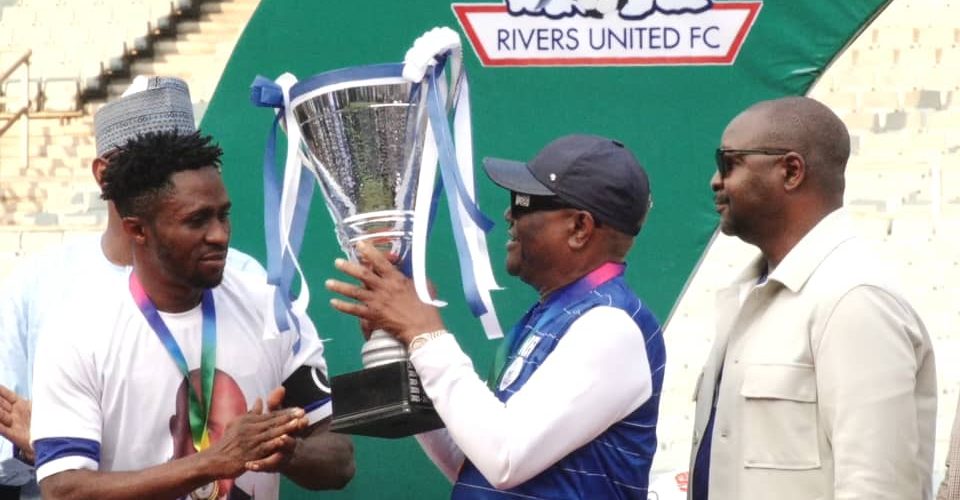 Rivers State governor, Nyesom Wike says Nigeria may never fully actualise its sporting potential if political considerations are allowed to always interfere with what happens within the sports industry.

He made this known while speaking with journalists on Sunday evening at the Adokiye Amiesimaka Stadium in Omagwa, Ikwerre Local Government Area of Rivers State.

It ended 1-0 in favour of the state-owned Rivers United.

The event was also used for the coronation of Rivers United as the Champion of Nigeria Professional Football League 2021/2022 Season.

Wike stated that those who should superintend over sports affairs in Nigeria should be seasoned sports administrators.

The governor also pointed out that the random selection of persons to satisfy quota consideration has not truly been of any help in identifying the best talents and this has frustrated the growth of sports on an enduring scale in the country.

“Let us remove politics from sports. Let’s go for the best. NFF, the Super Eagles, Falcons, we must do things based on merit, getting those who are qualified.

“Let us not say take this from East, take from South, take from West, and take from North in order to make up the list, no. That won’t be the best for us.

Wike expressed delight over the emergence of Rivers United F.C. as the champion of the Nigerian League.

He stated that to put a team together to play as one and to win a trophy required firm leadership, which he encouraged.

“When I came on board in 2015, we had Sharks Football Club of Port Harcourt and we had Eagle Cement Football Club. I said, this is one State and for now (then), it is important to put our talents together so we will have a formidable team.

“It was not easy to achieve that and we didn’t expect it to be easy that way. But we thank God today that all our efforts have been fruitful in seeing that we have won the Nigerian League.

“So, leadership is key in everything you’re doing and if you don’t have that leadership, it would not have been possible for us.”

Wike said he was delighted that  Rivers State has won the Nigeria League and will represent the country in the Champions League.

He gave the assurance that his administration will  give the best support to Rivers United F.C as it prepares for the Champions League in order for them to return with the trophy from that competition.

Speaking further, Wike said that since government is a continuum, his administration has done the best it can for sports development in the state,  and believes that his successor will take over from where he has stopped.

“The question is about what is good for Rivers people. So, I don’t think that any governor or government that will be in charge of this State after my tenure, will relent with what we are talking about in terms of sports development. It concerns youth development.”

Nigerian Minister of Sports, Sunday Dare said it is exciting for him to witness the emergence of Rivers United F.C. as champion of the Nigerian League.

“I think that what is happening today is exciting for me. 20 games, and 10 clubs playing their final game and we are here to watch Rivers United being crowned the leader of the premier league. I think it is exciting.

While expressing his expectations of what the Nigeria Football Federation (NFF) should do especially with their election slated for September 2022, Dare said NFF must do the needful and give Nigerians fresh breath of air.

He said: “You know, there is always room for improvement and we know that NFF must be able to take care of their business. I have said it, they have a status, they have a Congress they should just do what is needful and give Nigerians the fresh breath and support they need.”