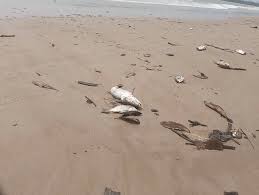 The people of Peremabiri community in Bayelsa on Friday regretted the insensitivity, neglect by the Shell Petroleum Development Company of Nigeria (SPDC) over an...

The people of Peremabiri community in Bayelsa on Friday regretted the insensitivity, neglect by the Shell Petroleum Development Company of Nigeria (SPDC) over an oil spill that occurred since two weeks

News Agency of Nigeria (NAN) repots  that the Chiefs, elders, youths and women groups in the coastal settlement on the banks of River Nun in Southern Ijaw Local Government  said that the spill is yet to abate.

According to them the continuous discharge of crude  into the environment has pollutted the Nun river, swamps and farmlands  causing untold hardship  to the predominantly fishing and  farming settlement..

and rugulators  to rise up to the occasion  and halt the leak.

They also called on the Bayelsa State Ministry of Mineral Resources, , Ministry of Environment and  environment focused no governmental organisations like the Envronmental Rights Action  to intervene.

He noted that the leak had polluted the entire Diebu Creek area and courged the parties to compel SPDC to ensure a stoppage of the spill and ensure a comprehensive cleanup of the affected areas.

According to the statement, Peremabiri community is currently bleeding profusely with oil spills as the whole river, swamps, ponds, farmlands and the general environment of the community had been devastated by the spillage .

The community said Shell  was yet to take any step to  mitigate the adverse impact of the oil and gas leakages  polluting the areas.

According to the community, Ccncerted efforts have been made to Shell to carryout a Joint Investigation Visit (JIV)  to find out the cause, volume, extent and impact of the spillage and depressurize the i acility and pave way  for response to no avail.

The community claimed that SPDC had been foot-dragging to commence a visit to the impacted area, and rather remained silent on the lingering oil spillage incident.

The community urge the State Government, well-meaning individuals and all relevant environmental authorities to   compel SPDC for a speedy end an to the leakage .

They urged remediation of the spill site while advocating for the immediate constitution of a Joint Investigation Visit team to ascertain the remote causes of the incident.

They further called for relief materials from the government, SPDC and  comprehensive health care arrangement for the directly affected people .

The statement  urged residents in the various fishing and farming settlements along the spill site to relocate to safer locations in view of the health implications.

It  could not immediately ascertain if the leak is from one of the many assets that SPDC divested  from  in  recent  moves to  move  out of land operations towards deep waters exploration  .

The management of SPDC  was yet to respond to a request for reaction.