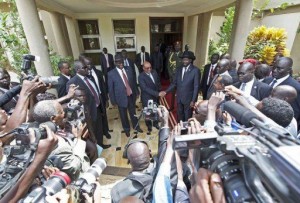 Sudanese President Omar al-Bashir traveled to South Sudan on Friday for the first time since the south peacefully broke away from Sudan in 2011.

South Sudan President Salva Kiir said the two presidents agreed to the free movement of people and goods across the border. Ten border points are to be opened.

Kiir said the two leaders will continue discussions on the contested region of Abyei, a sticking point between the two nations.

Bashir said he believed his visit signals the beginning of a normalization of relations and strategic partnership between the two countries.

Officials from both countries will soon meet to discuss rebel groups based in the two nations.