(AP) — Prosecutors filed criminal charges Tuesday against two journalists at a Nigerian newspaper over a story they published on alleged plans by the... 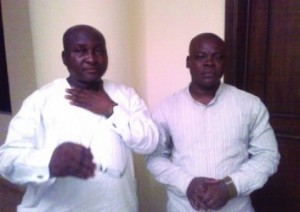 (AP) — Prosecutors filed criminal charges Tuesday against two journalists at a Nigerian newspaper over a story they published on alleged plans by the nation’s presidency to disrupt opposition parties. The charges are a sign of growing government pressure on the media.

Tony Amokeodo and Chibuzo Ukaibe face 10 counts of forgery after the daily Abuja-based newspaper Leadership reported on a memo it claimed came from officials working for President Goodluck Jonathan. Amokeodo and Ukaibe appeared briefly in court Tuesday before being released on bail, said Azubuike Ishiekwene, the group managing director of the newspaper.

Though the presidency later denied the authenticity of the memo, It is unclear why authorities are charging the two journalists criminally as libel is handled typically as a civil matter in Nigerian courts. Federal police spokesman Frank Mba did not respond to requests for comment Tuesday.

In the story, the newspaper said the memo called for officials to disrupt the business interest of opposition party leaders. The newspaper said the memo also included a mention of influencing the country’s Independent National Electoral Commission, as well as potentially raising the price of the oil-rich nation’s subsidized gasoline — an issue that sparked a nationwide strike last year.

Officials with Nigeria’s presidency later described the purported memo as a forgery and “cheap blackmail.” Yet, police officials earlier detained four journalists from the newspaper over it, including Amokeodo and Ukaibe. Those two journalists were released after their colleagues only on condition they reported regularly to police investigators. Officers arrested the two when they reported to police headquarters in Abuja, Nigeria’s capital, on Monday.

“We’ll have to wait to see how it goes,” Ishiekwene told The Associated Press. “It’s better for us for the matter to be charged to court and them to be held indefinitely.”

Journalists in Nigeria, Africa’s most populous nation of more than 160 million people, routinely are targeted by security agencies for the stories they write. In December, two journalists from a Hausa-language newspaper were detained for days without charges after their publication printed stories on alleged abuses by the country’s military in its fight against a radical Islamist sect. Journalists also face beatings and worse at the hands of thugs. At least 19 journalists have been killed in Nigeria since 1992, according to the Committee to Protect Journalists.

The crackdown against the newspaper has drawn criticism across other newspapers and in social media, with some comparing to the crackdowns made by military rulers before Nigeria became a democracy in 1999. Presidential spokesman Reuben Abati went as far as to describe the newspaper in a recent statement as an influence that could “threaten our democracy and undermine law and order.”

Abati later said: “This government is proud of its record on press freedom.”

The Committee to Protect Journalists earlier called on the Nigerian government to stop its “harassment” of the newspaper.

“Nigerian police efforts to intimidate journalists of Leadership newspaper into revealing the source of a document, which the government has dismissed as fake, is a heavy-handed abuse of power unacceptable in a democracy,” the committee’s Africa coordinator Mohamed Keita said in a statement.

Still, the press in Nigeria at times resembles the age of newspaper barons and yellow journalism in the U.S. Oligarch families and politicians own many of the major newspapers that circulate in the country, while military rulers previously handed out television broadcast licenses to trusted friends. Journalists themselves remain woefully underpaid, sometimes seeing their salaries arrive months late. That forces some to expect money from interview subjects or collect so-called “brown envelope” bribes from politicians to support themselves.