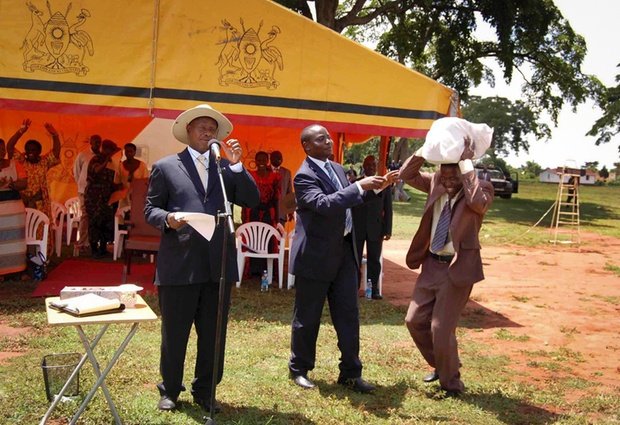 (AP) — It’s become an infamous photo in Uganda. The country’s leader looks on in bemusement as a young man bends low to carry... 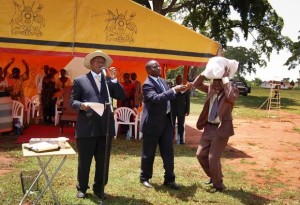 (AP) — It’s become an infamous photo in Uganda. The country’s leader looks on in bemusement as a young man bends low to carry a sack filled with a donation from the president — almost $100,000 in cash.

The money is a donation from President Yoweri Museveni to a partisan group of youths in eastern Uganda, where he struggles to win votes in national elections, and activists and opposition politicians are seizing upon the moment as a blatant example of political corruption in Uganda.

The picture, which was distributed by the president’s office after the event last weekend, was meant to highlight Museveni’s generosity toward a group of youth. Instead it has focused attention on Museveni’s profligacy during political tours and what some say is his role in fueling graft in the East African country that he has led since 1986.

Museveni has long been accused of using public money at his disposal to build the patronage networks that have kept him popular in some parts of the mostly impoverished country. He makes many promises at campaign rallies and distributes brown envelopes to supporters who beg for his help at campaign stops.

But donating a sack filled with Ugandan bills hit a raw nerve among critics who say it makes the president look like he’s actively buying support. Others say it sets a bad example in a country that depends on foreign donors to finance about 25 percent of its budget.

“It’s not generosity; it’s patronage,” said Bishop Zac Niringiye, a retired Anglican cleric. “The level of patronage is also related to regime longevity. He’s stayed in power for too long and he thinks he can do things and get away with them.”

The political success of Museveni, who took power by force in 1986, has been built in part on the idea that he is the generous, moderate politician who rescued Uganda from brutal dictators. But some also see a desire to stay in power at all costs. In 2005 Museveni had term limits removed from the constitution so he could run for office again, and Ugandan police routinely block the opposition from holding rallies. The ruling party, citing indiscipline, last week expelled four lawmakers who persistently criticized official corruption.

Museveni, who was re-elected in 2011, has not said if he will run when his current term expires in 2016, by which time the president who is now in his late 60s would have ruled Uganda for three decades. The substantial cash gifts he’s giving out suggest he’s looking forward to the next election, some opposition politicians and activists say.

“This is the new form of corruption that we need to talk about “, said Geoffrey Ekanya, an opposition lawmaker. “It’s actually theft of public resources.”

Ekanya said giving garden tools and seeds to the jobless youths would have been a more meaningful gesture than giving out cash that will be fought over.

The president’s office defended the cash gift, saying “donations” are budgeted for. Frank Tumwebaze, a government minister for presidential affairs, said the rest of the money comes from entertainment per diems that Museveni doesn’t claim for himself. The president’s office said the sack had 250 million Ugandan shillings in it, just shy of $100,000.

Because some of the money is given in sealed envelopes, it’s hard to tell how much Museveni donates. The lack of transparency has often brought his office into conflict with lawmakers who are asked to pass supplementary budgets after the presidency runs out of cash midway through the year. Lawmakers approved $23 million for the president’s official household in the last budget, but at least $74 million has already been spent and more will be needed before the year is up, according to lawmakers handling the presidency’s latest budget proposal.

Museveni, who has two official residences, flies in a Gulfstream private jet. This year he added two new Mercedes Benz limousines to his motorcade. In a country that is short of nurses and doctors, and where teachers have recently gone without pay, some say such expenditures are unacceptable.

“Which president walks around with kilograms of money? It looks so pedestrian. It doesn’t augur well for his stature,” she said.