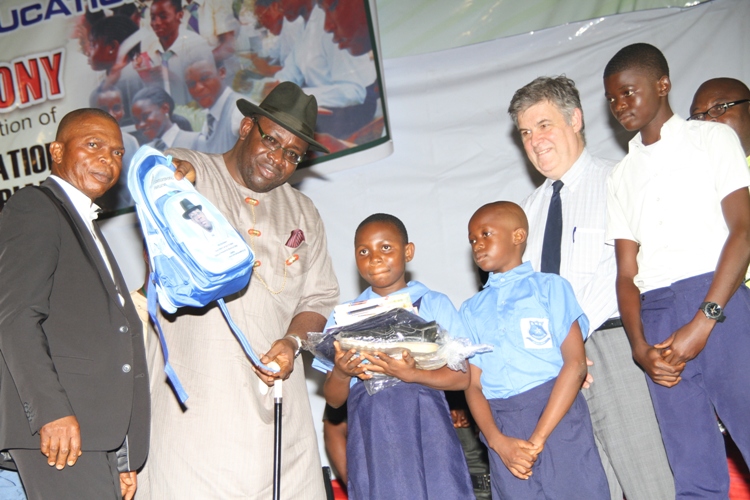 Bayelsa State Government has commenced the distribution of free uniforms, text books and other materials valued at N776m to primary and secondary school pupils... 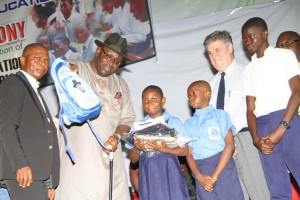 Bayelsa State Government has commenced the distribution of free uniforms, text books and other materials valued at N776m to primary and secondary school pupils in the State in line with the present administration’s free and compulsory education policy.

Also, the State Governor, Hon. Seriake Dickson announced the award of a contract for the supply of additional text books to secondary schools worth N500m, additional an approval of N50m to local government areas for the provision of school uniforms.

Leading other notable dignitaries including Chairman of the British African Alliance; David Smith, South Africa Counsellor for Political and Economic Affairs, Thandi Mkowaki at the flag off ceremony for the distribution of Free Education Materials held inside the Banquet Hall of Government House, Yenagoa, the Governor said the distribution of Free Educational materials was in line with the cardinal objectives of his administration.

The distribution of Free Education materials, according to the Governor kicked off with the provision of school materials including uniforms to 100,000 pupils in the State while delivery of additional 100,000 will be taken in due course.

Noting the increasing number of pupils and students in schools, Hon. Dickson said it has become necessary for Government to make additional provision for those at the grass root level.

“As at now, we have only 100,000 uniforms to give, we have another 100,000 uniforms yet to be delivered but even until those ones come, we are giving N5m to six local governments based on their population, while Yenagoa and Southern Ijaw will have N10m each. This is just the first instalment. We want you to try your best, work prudently and ensure that these things go down well. We know that it will not be enough, once you exhaust it, you come back to us and we will make more releases. As part of our empowerment programme, the contract for the sowing of the additional uniforms will be awarded to the competent fashion designers in each of the local government areas”.

On the new contract for the provision of additional text books, the Governor said it was to ensure that all the students and pupils in the State benefit from the scheme.

Describing education as an instrument of change and prosperity, the Governor reiterated his administration’s commitment to improving the standard of education, adding that with sound educational policy, the State will rank among the best in the comity of states.

“When I took over a mantle of leadership over a year ago, I declared a State of Emergency in the sector, education for us is an instrument of change, promoting development, prosperity and safeguarding the future of our state.”

Highlighting the achievements of the present administration, Hon. Adikumo said the government has embarked on the reconstruction of over 200 dilapidated public primary and secondary school buildings across the state.

He explained that, some of the structures are being remodeled to provide for ICT, libraries, science laboratories, and toilet facilities.